THINGS TO DO IN BANGKOK, THAILAND

With its chaos, humidity and traffic-congested streets, Bangkok can overwhelm visitors at first. Bangkok isn’t the best tourist city in the world; it’s dirty and it smells, especially compared to the immaculate streets of Singapore. What I remember about Bangkok are the temples, traffic and shopping. Oh! And the humidity. Wait, I mentioned that already.

Bangkok has a lot of temples; start with a tour of the Grand Palace and neighboring Wat Pho, home to the famous reclining Buddha. Take a boat across the river to Wat Arun (Temple of the Dawn) to get stellar views of the city atop of the temple. If you are in Bangkok over the weekend, carve out a day for the Chatuchak Weekend Market.

If there is one must-see sight that no visit to Bangkok would be complete without, it’s the ostentatious Grand Palace, undoubtedly the city’s most famous landmark. Located on the Chao Phraya River, the gold-spired Grand Palace is one of Thailand’s most important sacred sites. The complex, built in 1782, served as the home of Thai kings for 150 years.

Wat Phra Kaew, more commonly known as the Temple of the Emerald Buddha, is widely regarded as Thailandís grandest and most sacred site. The temple, located inside the Grand Palace complex, was built by King Rama I and houses a statue of Buddha carved out of a single piece of jade. The diminutive but greatly revered Emerald Buddha dates back to the 14th century. It sits atop an elevated altar, barely visible amid the gilded decorations, and is always cloaked in royal robes, one for each season (hot, cool and rainy). The robes on the Buddha are changed with the seasons by The King of Thailand, and forms an important ritual in the Buddhist calendar.

Wat Phra Kaew is guarded by tall and angry-looking yakshas (giants or demons). Everything is covered with gold leaf, ornate jewels and glazed ceramics, all placed on solid marble pediments. Statues of one of the Ramakien star characters, the monkey-king Hanuman, can be seen repeatedly, bearing the weight of chedis or guarding entrances to some of the minor buildings.

The Reclining Buddha is 15 m high and 43 m long, covered in gold leaf

If you only have time to visit one attraction in Bangkok, make it Wat Pho, which hosts the largest reclining Buddha as well as the largest collection of Buddha images in Thailand. The impressive Reclining Buddha, 150 ft long and 50 feet high, represents the passing of the Buddha into nirvana. The figure is modelled out of plaster around a brick core and finished in gold leaf. Dropping a few coins into one of the 108 bowls along the corridor near the statue is believed to bring good fortune (and help the monks maintain the temple).

For more on Wat Pho, see Things to Do in Thailand: Wat Pho Temple 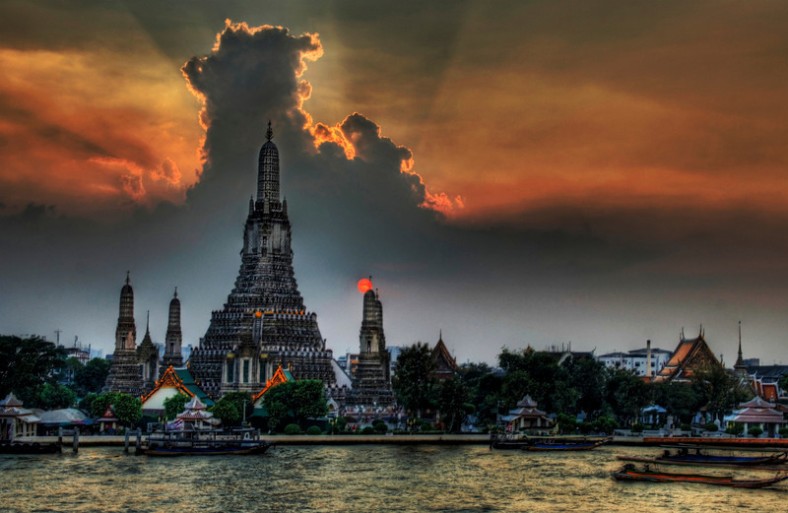 “One Night in Bangkok” (Photography by Trey Ratcliff)

Wat Arun, or “Temple of Dawn”, is one of Bangkok’s signature landmarks. After seeing the Reclining Buddha, you can hop on the river boat express and cross the Chao Phraya River. Wat Arun’s courtyard contains five Khmer-style prangs, each held up by porcelain monkeys and tired-looking demons. The prangs are covered in thousands of glistening pieces of broken porcelain. It’s possible to climb about halfway up the steep stairways of the central prang to enjoy the views across the Chao Phraya River.

At 27 acres with more than 15,000 booths, Chatuchak Weekend Market is among the largest markets in the world. Chatuchak seems to have everything under the sun, from used vintage sneakers to baby squirrels. Itís also where local people go to do everyday shopping, so itís a great way to experience real local life. Come early, to beat the crowds and the heat. Take breaks. Bring cash.

WHAT TO AVOID IN THAILAND

Take tuk-tuks, theyíre great fun. Stay away from the ones that are waiting outside touristy spots as they might try to scam you. Whenever you hail a cab, insist that they turn on their meter. Taxi drivers in Thailand are notorious for ripping off tourists, often coming up with excuses, saying that the meter is broken, etc. etc. Don’t fall for it. By law, they are required to use the meter. If they refuse, just move on to the next taxi.

Don’t believe the “touts” who approach you outside the grand palace or temples and tell you it is closed. These are scammers trying to put you in a tuk-tuk (which takes you all around town to seedy shops trying to sell you things you donít want). Any shop paying to receive customers, whether jeweller, tailor or massage parlor, isn’t going to be a very good shop and the prices are likely to be hugely inflated.

Skip the floating market, as they are aimed at tourists. Once upon atime, Bangkok was “the Venice of the east.” Built upon water, its river and canals (khlongs) formed the thoroughfares until roads were constructed in 1851. Think about it – with the advent of roads and automobiles, does anyone really buy groceries over floating markets anymore?

A word on BANGKOK NIGHTLIFE…grab a drink at the Sky Bar atop the Lebua State Tower. 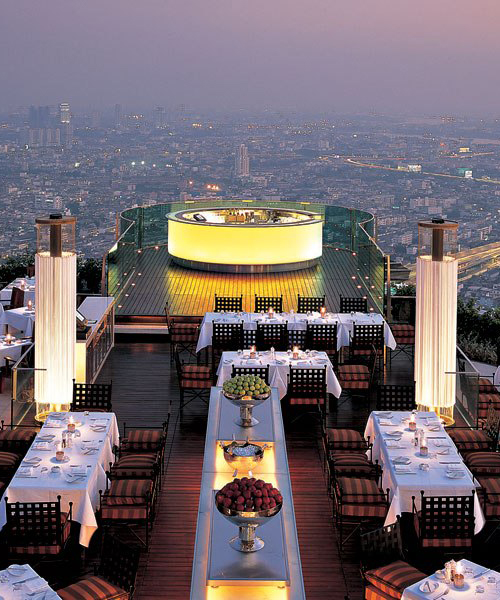 The post, Things to do in Bangkok, Thailand (and What to Avoid), appeared first on Live East of Eden.

New Year Wish: "Make New Mistakes. Make glorious, amazing mistakes...Whatever it is you're scared of doing, Do it." @neilhimself
Setting goals and creating a vision board for the year ahead. Time to re-read "The Alchemist" by @paulocoelho
Dinner is ready. @snakeriverfarms Waygu ribeye filet, and @costco lobster tail with lemon garlic butter.
What could go sideways in September? 😜
There's me - almost front and center! What an amazing selection of short films from #USC Asian Pacific Islander students. Plus, I got to meet actor Ludi Lin (Black Mirror, Aquaman, Mortal Kombat).
Today, @uscedu announced major changes to its financial aid program: families with $80k or less can attend tuition-free. @presidentfolt held a reception in Orange County, powered through Q&A, and spoke to everyone who waited in line to meet her. What a day!