So far, my plan to marry rich has not come to fruition yet. Time for Plan B: read up on personal finance books, or find some good reads on how to become wealthy. Let’s see what secrets are revealed in this 75+ year-old book, “Think and Grow Rich” by Napoleon Hill. Published in 1937, it’s still one of the best-selling books of all time, selling over 20 million copies.

More than 75 years after its first publication, Hill’s lessons are as timely as ever. But don’t expect any stock tips, lotto numbers or any get-rick-quick schemes. OK, why did I read this again?

Hill spent nearly 20 years interviewing more than five hundred of America’s most successful tycoons in his day, including: Andrew Carnegie, Thomas Edison, Henry Ford, John D. Rockefeller, George Eastman and FW Woolworth. Pretty much every millionaire except Donald Trump. Oh wait, Trump may have a bad comb-over, but he’s not old enough to have been around during the Great Depression.

“The starting point of all achievement is DESIRE. Keep this constantly in mind. Weak desire brings weak results, just as a small fire makes a small amount of heat,” (p. 122).

Edwin C. Barnes. Ever heard of him? Me neither. Apparently, this Barnes guy showed up on Thomas Edison’s doorstep one day and announced that he was going to be the inventor’s business partner. Well, he started out as a minion doing the most menial work, and 5 years later become Edison’s business partner.

In a nutshell, here are six steps to turning a DESIRE for wealth into actual wealth:

“The way of success is the way of continuous pursuit of knowledge,” (p.63).

Henry Ford did not have much schoolin’, but some made the mistake of assuming that Ford was not an educated man. During World War II, Ford sued a Chicago newspaper for calling him an “ignorant pacifist”. The paper’s attorneys put Ford on the stand and asked him a bunch of Trivial Pursuit-like questions aimed at revealing his ignorance. When Ford tired of the questions, he asked the lawyer, “Why should I clutter up my mind with general knowledge, for the purpose being able to answer questions, when I have men around me who can supply me any knowledge I require?” (p. 58). It pays to hire minions. KEY TAKEAWAY: Education isn’t about how much you know, but in your ability to find the answers. 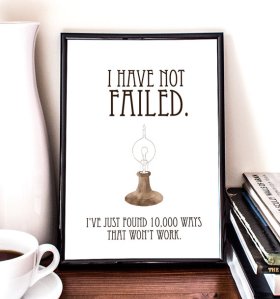 Motivational Art by PrintableRandoms via Etsy

“When defeat comes, accept it as a signal that your plans are not sound, rebuild those plans, and set sail once more toward your coveted goal…A quitter never wins, and a winner never quits,” (p. 81). Wait, Yogi Berra didn’t coin this?

After you have created your plan for wealth, make the plan come together: 1) form a “Master Mind” advisory board, 2) be sure that you have something them as well, and 3) meet with your advisory board regularly. Should plans fail, simply create new plans.

Why Men Seldom Succeed Before the Age of Fifty

“Those who succeed in an outstanding way seldom do so before the age of 40. More often, they do not strike their real pace until they are well beyond the age of 50,” p.146. And then came Mark Zuckernerg, Kevin Rose, Pete Cashmore, and Neil Patel.

On a more serious note…The Mystery of Sex

Sexual energy is the most intense and powerful of all mind stimuli and has the potential of transforming mediocrity into genius. According to Hill’s scientific research, the men of greatest achievement are men with highly developed sexual appetites. KEY TAKEAWAY: have lots of sex. Genius.

To go beyond my key takeaways, read Think and Grow Rich.

Hill’s book is credited as the predecessor to self-help gurus such as Dale Carnegie (How To Win Friends and Influence People) and Tony Robbins (Awaken the Giant Within: How to Take Immediate Control of Your Mental, Emotional, Physical and Financial) as well as get-rich gurus such as Dave Ramsey (The Total Money Makeover Workbook: A Proven Plan for Financial Fitness), and Robert Kiyosaki (Rich Dad Poor Dad).

Now, back to my pressing question, could more diamonds be mined from the brains of women than from the earth itself?

New Year Wish: "Make New Mistakes. Make glorious, amazing mistakes...Whatever it is you're scared of doing, Do it." @neilhimself
Setting goals and creating a vision board for the year ahead. Time to re-read "The Alchemist" by @paulocoelho
Dinner is ready. @snakeriverfarms Waygu ribeye filet, and @costco lobster tail with lemon garlic butter.
What could go sideways in September? 😜
There's me - almost front and center! What an amazing selection of short films from #USC Asian Pacific Islander students. Plus, I got to meet actor Ludi Lin (Black Mirror, Aquaman, Mortal Kombat).
Today, @uscedu announced major changes to its financial aid program: families with $80k or less can attend tuition-free. @presidentfolt held a reception in Orange County, powered through Q&A, and spoke to everyone who waited in line to meet her. What a day!