When I first asked for tips on what to do in Washington DC, everyone kept telling me to go to the National Mall. As in a shopping mall like the Mall of America in Minnesota – with an indoor theme park, an aquarium, and 5 separate Caribou Coffee locations? No, no. The National Mall is a two-mile stretch of land filled with monuments, memorials, and museums – marked by the U.S. Capital Building to the east and the Washington Monument to the west.

The National Mall has been the setting of historic events. Martin Luther King, Jr. delivered his “I have a Dream” speech on steps of the Lincoln Memorial. The largest officially recorded rally was the Vietnam War Moratorium Rally on October 15, 1969 – even Forest Gump made an appearance. Side note – although ‘Scandal’ takes place entirely in D.C., the show is actually shot in L.A. 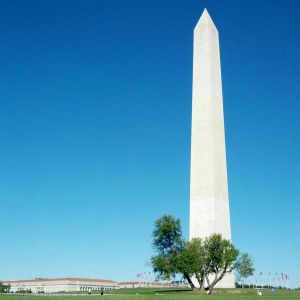 The Washington Monument is of one of the nation’s most recognizable structures, and stands as the centerpiece of the National Mall. The obelisk-shaped memorial is made up of marble, granite and bluestone gneiss, and was built to commemorate George Washington, the first American president (the guy on the $1 dollar bill). By law, no other building in D.C. is allowed to be taller. At 555 feet tall, it’s a perfect way to get a bird’s eye view of the nation’s capital. Two ways to get tickets: get free, same-day tickets at the ticket window, or make advance reservations online (nonrefundable services fees apply).

This little bit of trivia is not enough to help you win Trivial Pursuit, but maybe one day you can say, “everything I learned about history, I learned here!”. 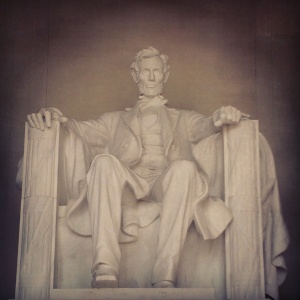 A 19-foot statue of Abraham Lincoln

The Lincoln Memorial, another iconic landmark, is a tribute to President Abraham Lincoln (the guy on the $5 dollar bill), who fought to preserve our nation during the Civil War. The memorial is an example of Neoclassical architecture and its 36 Doric columns represent the 36 states in the Union at the time of Lincoln’s death. The structure features a solitary, 19-foot-tall statue of Abraham Lincoln, and the walls are inscribed with words of the Gettysburg Address and the Second Inaugural Address. Visiting tips: visit early in the morning (when the steps are less crowded), or at night (when the structure is beautifully illuminated).

The Thomas Jefferson Memorial, modeled after the Pantheon of Rome, is located on the shore of the Potomac River Tidal Basin. The memorial sparked controversy when numerous cherry trees were cut down to make way for it. The memorial is surrounded by 26 columns which represent the number of states in the union when Jefferson died, and the outer stonework is Vermont Imperial Danby marble. A 19-foot tall, five ton bronze statue of Jefferson stands in the center of the building. Due to metal shortages during World War II, the statue the statue was originally cast in plaster. Once the war ended, a bronze statue replaced the one made of plaster.

Up for discussion: how do you think President Thomas Jefferson feels about his $2 dollar bill being out of circulation?

This post highlights some of Washington DC’s memorials and monuments. In a future post, I will cover the Smithsonian museums.

Until then, for a thrilling read: Dan Brown’s “The Lost Symbol” follows up on the perils of Harvard symbolist Robert Langdon (we last saw him as Tom Hanks in “The DaVinci Code”). This novel is set within the hidden chambers, tunnels, and temples of Washington, DC.